…the stories of my 11 RV Park grade my paper comedy tour in Arizona for the month of February.  The road, the terrain and the people, all to find out why aliens land in trailer parks to mate with the residents.

Preparing for my Trailer Park Tour I attended a Steeler Party in San Diego. To report writing watch the one minute video of the Elk’s Club Steeler Party click here: https://youtu.be/rzW3NqBlgcAhttp://

…what I did when snoring was no longer a laughing matter 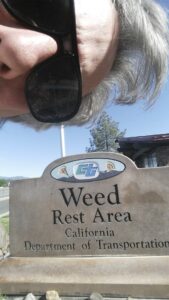 I’ve been married for 26 years. Well, not in a row. The second marriage took a turn for the worse when my snore became likened to “a circular saw cutting through sheets of aluminum,” “a giant sinkhole sucking down Chicago,” and “the snore that rattled the West.” My snore could be heard through a closed door.

I’d be lying flat on my back in fitful sleep with my soft palate and uvula vibrating louder and louder. As the constriction sinks farther down my throat, I stop breathing and my legs twitch. I gag and explode, gasping for air, bolting upright. I see my wife glaring at me, her fist and her jaw clenched. I say, “Wow, baby, guess you couldn’t sleep either.”

She threatened to use duct tape. A taser. Finally the note on her desk:

To stop the snoring, place pillow tightly over face. Hold until snoring stops. Burn this note.

Much later, Dr. Hasani stares down my throat, and tells me that the physiology of my soft palate (which vibrates during snoring, along with the uvula) makes me a perfect candidate for sleep apnea. Sleep apnea?

I read online that the symptoms of obstructive sleep apnea exactly fit my symptoms. For 10 years, I have felt worse and worse with a devil whispering in my ear, “You’re getting old.” I wake up with a dry mouth and a headache, and my first thought is “when will I be able to nap?” I take a huge dose of ibuprofen and start slamming coffee. By 10 o’clock, I’m smoking weed. I get through the work day OK with ibuprofen, caffeine and cannabis sativa. 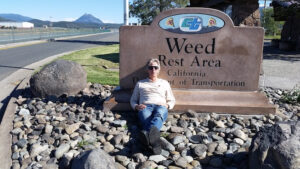 RESTFUL TIMES Above: the author after tackling his sleep apnea problems with a CPAP machine (top).

My wife Julie videotapes me on the couch with my daughter. While talking, I pass out, head back. I choke until I stop breathing, flop around and gasp for air. The video captures my daughter looking at me with incredulous disdain. 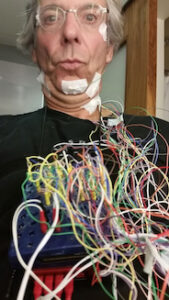 Wired up for the Stanford Sleep Study Test.

After a torturous sleep study test at Stanford I’m diagnosed with severe sleep apnea. I feel my mortality. Like all baby boomers, I fully expect to live forever and I tell my new sleep doctor, Dr. Tony Masri, that my goal is longevity. He says, “Longevity happens in the bedroom.”

Makes sense to me. My father fell out of bed, broke his hip, went to the hospital and died of pneumonia. That’s why I take Viagra nightly, to keep from rolling out of bed. It works like a brake.

The good doctor lays it out. “Apnea” means “without breath.” Every time breathing stops, the level of oxygen in the blood falls and the heart must pump harder until the person awakens to resume breathing. Dry mouth means you are having a lot of apnea events. About one in four men have sleep apnea, and it’s about half as prevalent in women.

Here’s another bummer: recurring low oxygen levels throughout the night can lead to stroke, Alzheimer’s disease, dementia and on. There is a lot of snoring and a lot of dementia in my family. If I can’t beat this thing, I’m screwed.

At least it inspired a poem:

When I sleep with my mouth open, it blocks my air lanes

I stop breathing and oxygen stops getting to my brain

I wake up with my head pounding in pain

In bed six hours I want to pass out again

I take ibuprofen and drink coffee to maintain

Smoke weed to feel better but I mostly feel insane

I wake up breathless with pounding chest pains

How many men has this succubus slain?

Dr. Masri persuades me to try a CPAP, which stands for Continuous Positive Airway Pressure. It pumps a low pressure air stream through your nose into your lungs, and that keeps your throat open and keeps the soft palate from closing. Wearing it, you look like a character out of the Star Wars cantina scene. Julie calls it my “nose face.”

Getting used to the mask was a steep learning curve for me. At first, a chin strap feels like something that must be outlawed at the Geneva Convention. My chin strap and my CPAP headgear was so tight it felt like I was in an Iron Maiden torture device. 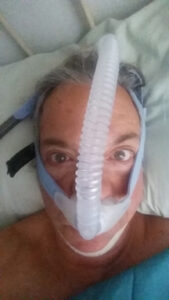 But on the first night I got lucky. It worked. I strained against teeth-clenched claustrophobia all night, but that morning I walked with a spring in my step that I had not felt in 30 years. I hustled around Santa Cruz all day, partied with Julie into the night and I was hooked. I’m bionic. Immortal once again.

I had some bad nights after that while I struggled to get used to it. Many. Now, two years later, it’s easy.

I’ll leave you with three notes about using a CPAP:

Boom with a View by Richard Stockton was published March 11, 2015 in the Good Times Weekly Santa Cruz Senior Project

Boom with a View

I perform mostly in theaters these days but I did a comedy club recently and as I walked to the microphone I heard a twenty-something whisper, “Fossil!”

The definition of fossil is “an impression of life in the past, a marker of evolutionary relationships among organisms.” It also means, “A cranky, stubbornly unchanging person.”

I hereby take both definitions as my own. It is my mission to present my baby boomer generation with impressions of our moments of evolutionary change to remind ourselves how dynamic we are and all the things we went through to get this way. And I do get cranky. I’ve gone from “born to be wild” to “born to be riled.”

I am Fossil. I am a three dimensional impression of moments imbedded in the evolutionary layers of baby boomer history.

We’ve gone from Hi-Fi to Wi-Fi.

… from Minnie Mouse to mini skirts to mini vans.

… from hippy to hip replacement.

The Vietnam War divided my generation and we leading edge baby boomers continue to split apart. Even now the two halves of my generation come together like a hospital gown. One half of my generation focuses on protecting their wealth, making sure the younger folks keep the SS payments coming to pay for their golf green fees. But the other half of my generation is looking at the final third of their lives as a chance to get it right this time, to make a difference, to make their Aquarian dreams of the 60s live. And one place that is gearing up for this Silver Tsunami is the adult activity center.

Linda Minton, First Vice-President of the Mid County Senior Center, says, “We’re not putting flat screen TVs and couches in here for boomers to lay around and complain. This center will be active!” Boomers do not want to go out with a heart attack because their favorite TV show didn’t come on. They want to go out making a TV show that could change people’s minds.

“Senior centers are being renamed Adult Activity Communities,” says Janet Sumpter, Director of the Los Altos Recreation Center in Los Gatos. “The idea is that everyone brings their talents, their skills to teach the others.” Changing the name to “Adult Activity Center” fits the new breed coming in. They are becoming meeting centers for boomers to start a rock band, organize community service projects, practice yoga and martial arts, even to produce baby boomer comedy shows.

In the sixties the four baby boomer elements of the universe were fire, water, air, and vinyl. We communicated our values through the music on that vinyl. When Jimi Hendrix performed the Star Spangled Banner at Woodstock, complete with the guitar sounds of the military industrial complex bombs exploding, we could step away from all the patriotic posturing. We internalized this fossil of musical art and it has become part of how we look at the Vietnam War. When the Beatles sang, “It’s getting better all the time,” that was not something we hoped for, we expected it. We required it. We were the first generation that had the audacity to want our work to be fun.

At the beginning of the sixties, we saw women kept in the shadows. In 1961 Marvel Comics introduced the first female super-heroine… Invisible Girl. Her superpowers were that she could not be seen and not be heard. Boomer women have never lived in the shadows and they are not going to start now.

My life partner and Planet Cruz Comedy co-producer Julie Zito Flannery writes, “do not underestimate boomer women in society. We have given birth, buried our parents, laid to rest our girlhood dreams, witnessed the heartache and disillusion of our generation. We have taken on the job of rebirthing hope and meaning to the lives of our aging peers, and inspiring our grandchildren with our undying optimism.”

People refer to my “decline.” I think “change” is more accurate. It is true that on the baseball field my foot speed is gone. There are a lot of places for a fly ball to land around me. My son said, “Dad, you look like a man playing baseball under water.” Even hitting the gym five days a week, I have maybe 80% of the strength of when I was 28. But my emotional growth, my ability to turn fear into excitement has grown ten fold. Except when I’m cranky.

In 1982 he became the morning talk show host of WKDA/KDF in Nashville, Tennessee which was the number one talk show in the mid south for two years. In 1986 he became a full time touring comedian, based in San Francisco. In his twenty-six years as a standup comedian he has appeared on dozens of national TV shows, headlined A List comedy clubs from coast to coast – Improv, Punchline, Comedy … END_OF_DOCUMENT_TOKEN_TO_BE_REPLACED